When we ceded our land in Ohio on March 17, 1842, a long fight ended. This had not been a fight with guns or bows and arrows, but words and lawyers. We, the Wyandot tribe, had been lobbying Congress and fighting within the Federal court system for many years.

Our land had been invaded, cattle and horses stolen, leaders that opposed removal were mysteriously being killed in bed while they slept. There simply was no other option but to depend upon “the system” for protection of our tribal rights and treaties.

To fight this battle with a gun meant absolute destruction.

By 1842 we were civilized. Assimilated no! There were many who still remembered and practiced the “old-way” of life. The only way to insure that everything would not be completely lost meant moving west. Again.

All of our friends and allies had already made the trip. The Shawnee, Ottawa, Miami, Delaware and Seneca were across the Mississippi River “living life to it’s fullest.” The Wyandot, the last tribe east of the Mississippi to be removed, must now join them.

Starting over would be difficult, but a tribe that was born out of the ashes of destruction would survive.

We are one of the few tribes upon the North American continent that can specifically place a year on our birth. In 1649-50, remnants of the Tionontati (Petun or Tobacco) and Attignawantan (founding member of the Wendat Confederacy) fled west, seeking protection from the murderous onslaught of their cousins, the Iroquois Confederacy.

These people are now known today as the Wyandotte Nation. 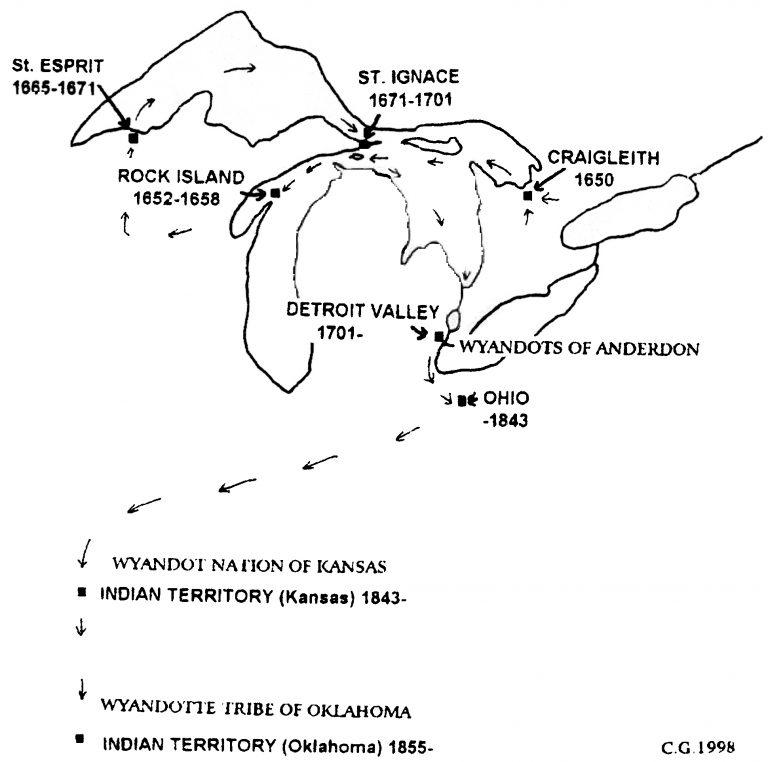