“Understanding other cultures, races and ethnic groups can go a long way in promoting respect among all nations around the world as many of the stereotypes are created unintentionally by observers who do not understand the culture.

While some nations shared certain practices or adopted practices from other nations each Indigenous nation had its own ways of living and celebrating. One common misconception is that all nations originally held pow wows. The Haudenosaunee did not participate in pow wows until they became popular customs much later. Powwows originated with the Western Plains People.

There are also many misconceptions about dwellings. Most Indigenous nations had different dwellings depending on their location and lifestyle. A common misconception is that all native people lived in teepees. However only the nations of the plains who traveled often following the migration of the buffalo lived in teepees. Haudenosaunee, known as the people of the long house lived in long bark covered houses.

A long held misconception is that the history of North America started with the arrival of the Europeans but long before Europeans settled on the shores the Haudenosaunee people were thriving on the land. Called Ongwehonweh or “original people” it was the Haudenosaunee who helped the early settlers to overcome the hardships of the land.”

Names of the Country:

Haudenosaunee is the confederation of originally five Nations under one “Longhouse”. The -ga ending represents a placename similar to the -stan endings of Pakistan, Afghanistan, etc. 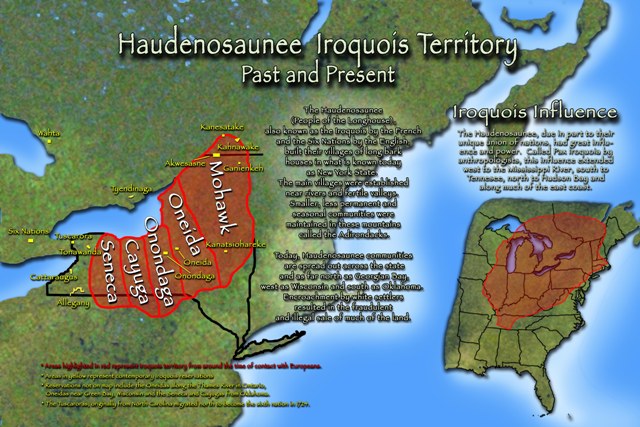